Rather a world where the old, infirm or unfortunate are simply taken away. Imagine a fleet of black vans, as common as ambulances. They would feature in that world’s Lego set of emergency vehicles. 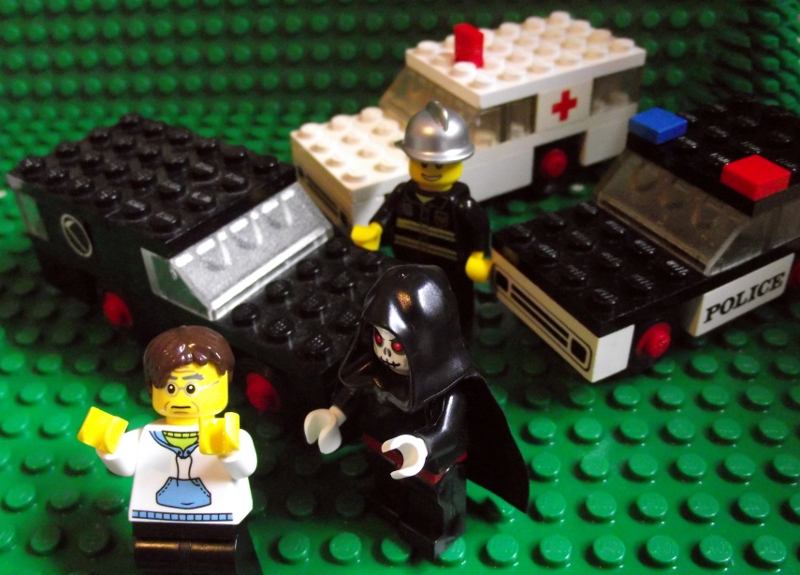 When your time came to be taken a van would pull up. The black-cloaked driver would get out, make his way to your bedside or tap you in the shoulder and with a bony nod of his head towards the van, you would simply rise and follow. You would be driven off towards an otherwise avoided, vast, windowless, black building beyond the limits and no one would ever see you again. No one ever came back.

Some driven by the loss of a loved one, curiosity or the need to escape a desperate environment would make their own entry to this StaSiesque establishment. They’d not be prevented from entering but they would never reappear either.

From time to time a driver might turn up for a collection, exchange glances with their intended and leave alone. The survivor would say they remembered suddenly feeling an irresistible desire to follow, that it seemed entirely the right and natural thing to do until, just as suddenly, the desire was gone.

But once someone had been taken, it was as though they no longer existed.

Imagine now a smart phone app called “PysClick” that claimed to allow you to text with a loved one who had been taken. Anyone could install it. You would tap the icon, enter your loved one’s name, “connecting…” would appear on the screen but that was the extent of its function. It had bad reviews online too. “It sucks! Waste of time! Uninstall!” 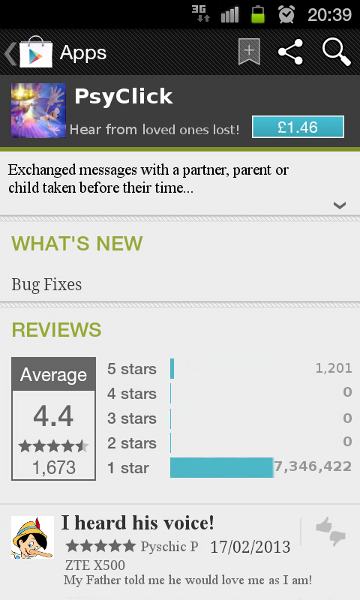 Yet for all the millions who gave it 1 star a handful claimed it was awesome; an elite who claimed they had the gift of using it. And they would offer to act as middlemen,  conduits or mediums between you and your lost one – for a fee. “Give me some money,” they’d say, “Tell me what you want to ask and I’ll tell you their answer.” You’d pose the question then they’d tap away, shielding the phone’s screen from view.

“Should I marry again after my wife’s death?”

“Your wife wants you to be happy, follow your heart. Fifty dollar.”

No one would believe it for a moment – it would have to be a fraud.

For no credible whisper had ever been heard from someone taken; certainly no one had ever come back.

And some conduits had definitely been exposed as frauds, employing the common tricks of the magician. For example, using a hidden earpiece relaying information from a remote accomplice who could dig up a few personal details on their mark and family online during the interview.

And how did the conduit arrange for your loved one to be so readily available on the other side of the wall at a moment’s notice? Billions of people had been taken, yet up pops your dearly departed on demand. That’s impressive admin. Perhaps when they passed over, people gained greater powers and had the ability to foresee your attempt to make contact, though they seemed to lack the power to be there when you use the app. One would expect them more likely to contact you directly rather than through someone who will charge you.

And the conduits made a good living off their fees which raised the issue of the provenance for their claims that could never be corroborated.

So how could anyone believe it?

Perhaps if they’d been inculcated from before they could even talk with fables of a guy who had actually come back, they would be more open to this groundless hope.

Perhaps if that society were scientifically illiterate and avoided condemning such old stories for fear of offending, they wouldn’t feel so foolish grasping at such a thin straw.

Perhaps if they were bereaved, shattered by the pain of loss with a need to communicate more powerful than the natural doubt, they would seek comfort in this deception.

What I don’t get is how a conduit could continue in this fraud, lying to people about their dead loved ones to take their money.

Actually scratch that. I don’t get muggers and rapists but they get locked up, so that’s fine.

Conduits are free to conduct their business and submit tax returns.

That I don’t get.